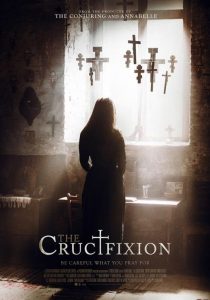 With his feature debut, 2007’s Frontier(s), Xavier Gens became an instrumental figure in kicking off the celebrated New French Extremity movement. Since then he’s only released two further features – 2007’s Hitman and The Divide in 2011 – but will be firmly back on our radars soon, with two more films set for release this year. The first is the long-delayed adaptation of Albert Sánchez Piñol’s best-seller Cold Skin, and the second is a true-life tale of an exorcism gone wrong, entitled The Crucifixion. The latter now has a poster and trailer, which you can see below.

The Crucifixion – which looks to be far from your average possession flick – was scripted by The Conjuring writers Chad and Carey Hayes, and produced by Peter Safran (The Conjuring, Annabelle), alongside Leon Clarance (The Titan) and Ara Keshishian (Maggie).

Synopsis:
When a priest is jailed for the murder of a nun on whom he was performing an exorcism, an investigative journalist strives to determine whether he in fact murdered a mentally ill person or if he lost the battle with a demonic presence. 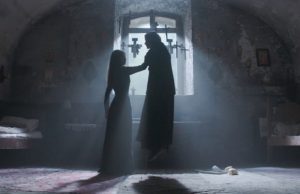 Keep an eye out for The Crucifixion (and indeed, Cold Skin) later this year.