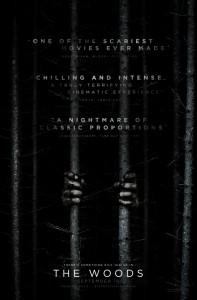 September 16th. Mark it in your diaries. If internet hype is to be believed (and in this case, it just might be), then the date will mark a game-changing moment in modern horror, with the US release of Adam Wingard’s The Woods. The film was screened for a select few critics this week, and they promptly lost their collective shit over it.

Lionsgate are pushing the film hard and have just released this unsettling teaser as well as the first poster, which assures us we’re in for a terrifying ride. Wingard is clearly excited to unleash his latest, tweeting: “This is my first full on “shit your pants” horror film.”

Written by Wingard’s regular collaborator Simon Barrett, The Woods involves a group of college students who head into the woods for a camping trip, but soon discover they are not alone. This is about all we have to go on, with further plot details being kept under wraps. 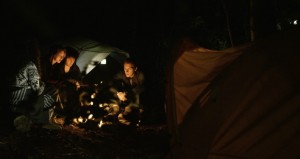 There are some serious horror credentials on the producing side, with Roy Lee (The Ring, The Grudge, The Strangers), Steven Schneider (Paranormal Activity, Insidious), Keith Calder and Jessica Wu (Wingard’s You’re Next and The Guest) all onboard.

Wingard has been steadily rising through the ranks as a genre director with an impressive and acclaimed list of credits including A Horrible Way to Die, You’re Next and The Guest, but The Woods could take him to the next level. Seriously, we could have the next Carpenter or Craven on our hands here.