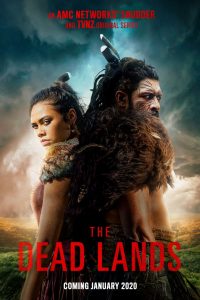 Shudder’s new original series The Dead Lands arrives in the new year, and the official trailer is full of eerie spirits and gory kills!

A co-production with New Zealand’s TVNZ, the series mixes elements of supernatural horror with action and adventure. Set in a mythic Māori past, it follows Waka Nuku Rau (Te Kohe Tuhaka), a murdered Māori warrior, who is sent back to the world of the living to redeem his sins. But a breach between Life and the Afterlife has ravaged the world, and the spirits of the recently deceased have returned to hunt the living.

Accompanied by Mehe (Darneen Christian), a determined young woman who becomes his protégé and moral compass, Waka sets out on a quest to find out who is responsible for the breach and whether it can be fixed. Along the way, the pair must navigate tribal politics, unsettled ghosts, and dangerous forces—both natural and supernatural.

The Dead Lands is directed by Peter Meteherangi Tikao Burger and Michael Hurst and written by Glenn Standring, who also wrote the 2014 feature film of the same name. That film is set in the same mythic world, but its characters and story are unrelated.

In a press release, Shudder noted that the creation of the series required “authoritative Māori control and advice to be present in all areas, both in front of and behind the camera” in order to honor the culture and people. Elements of Māori rituals are reimagined and woven throughout the series, and screen combat is performed in the Māori martial art of Mau Rākau.

Will you be visiting The Dead Lands? Check out the trailer below for a bloody taste!