The Trailer for Sky Skarks Takes Flight and it is Wonderful

A completely barmy trailer has landed for Sky Sharks and it’s, quite simply, a thing of beauty. Following in the footsteps of other b-movie sci-fi comedies, we have an insane concept met with a low-budget and the end result is ridiculously entertaining. The special effects aren’t as bad as you’d expect and the film’s visual style is surprisingly appealing and reminiscent of Iron Sky. It looks bizarre, insane and truly delightful, and this comes from someone who switched off Sharknado after 10 minutes. 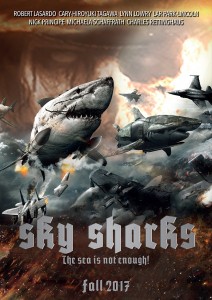 Synopsis:
Deep in the ice of the Antarctic, a team of geologists uncover an old Nazi laboratory, still intact, where dark experiments had occurred. Unwittingly the geologists unleash upon the world a top-secret experiment the Germans had been working on – modified sharks that are able to fly, whose riders are genetically mutated, undead super-humans. The only thing that can stop them, and possibly save the world, is a military task force called “Dead Flesh Four” – assembled from reanimated U.S. soldiers who fell in Vietnam.

Check out the glorious trailer below and bask in the film’s absolute madness. Candyman himself, Tony Todd, is in there for goodness sake.

Sky Sharks comes from director Marc Fehse and will be released on 1st September 2017 in the USA.