The Trailer for Recovery Shows the Fear of Phone Losing

A trailer has been released for Recovery, a horror-thriller that showcases the fear of losing your phone. The horror, the horror! A group of friends must track down their missing friend, not because she’s missing, but because she has one of their phones. 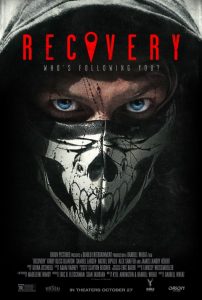 Recovery follows Jessie and her friends the night before their high school graduation as they are guided by a ‘Find My iPhone’ app to recover her lost device from a house whose demented tenants intend on making her a flesh and blood member of the family.

If anything, the film’s message is a good one… showing that you’re going to get your ass kicked if you seek out your phone before your friend. However, we’re unsure of how original the film can be when there are already countless films warning about the dangers of social networking, technology and the internet.

Recovery comes from director Darrell Wheat and stars Rachel DiPillo, Kirby Bliss Blanton and James Landry Hebert. The film will be released in limited cinemas on 27th October and on VOD on 28th October. Check out the trailer below; it’s filled with slasher scares and hints at the terror these young people are going to be subjected to.