The Trailer for Pyewacket is all Kinds of Crazy 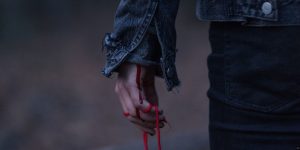 Ever been so mad at your mum that you’ve wanted to summon a witch to have her killed? No? Good. The terrifying trailer for Pyewacket follows a teenager as she struggles with her identity, overcoming the death of her father and, ultimately, trying to survive a life with her mother. Her plan? Use her interest in the occult to summon a witch called Pyewacket to put an end to her problems or, at least, her mum.

Pyewacket will be showing at the upcoming Toronto International Film Festival (TIFF) in the Contemporary World Cinema section, so promises to be a hard-hitting and chilling piece of genre film-making. Hailing from Canada, it certainly looks to tick all the boxes of a great supernatural horror, blending themes explored in Carrie, The Craft and The Babadook. Don’t let it in, indeed.

Check out the spooky trailer below and see the chilling consequences of calling a witch to do your dirty work. Pyewacket stars Laurie Holden, Nicole Munoz and Chloe Rose, and comes from Backcountry director Adam MacDonald. You can catch the film at TIFF, which runs from 7-17th September. The full schedule will be released on 22nd August.