We’re not sure what’s scarier, the demonic stare pasted on Owen Atlas’ face, the cheesy smile worn by Evangeline Lily or the sock puppet on Atlas’ hand. Either way, the new poster for Netflix’s Little Things is the stuff of nightmares and focuses on the childish horror that lurks beneath the blue skies of suburbia. 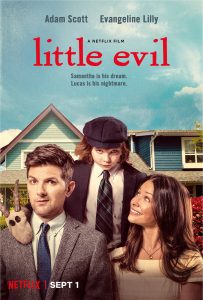 Little Evil is a horror-comedy that follows newlyweds Gary (Adam Scott) and Samantha (Lilly) whose son may be the Antichrist. Check out the recently released trailer, which shows the demonic exploits of a child that surely looks to be the son of Satan.

Little Evil comes from director Eli Craig, whose 2010 horror-comedy Tucker and Dale vs Evil broke down the rules and expectations of the slasher movie. This one is tackling the child-demon sub-genre – is there such a thing? – and it seems like it’s going to be just as hilarious, intelligent and entertaining.