Though nearly derailed following the death of a key actor, the final chapter of writer-director Stevan Mena’s Malevolence Trilogy has finally come to fruition. The extreme tale of kidnapping and torture becomes an immediate metaphor for the cycles of abuse and, though lesser-know to strictly mainstream horror fans, the previous installments should be part of any slasher aficionado’s curriculum.

Yesterday brought us our first look at Malevolence 3: Killer in the form of a trailer and poster. Give them both a look-see below, followed by the trailers and synopses for the first two franchise installments, Malevolence (2003) and its prequel Bereavement (2010).

Synopsis:
Kidnapped, tortured, and abused at the hands of his psychotic captor, Graham Sutter, Martin Bristol knows only one thing – murder. On the run, lurking in the shadows of suburbia, he stalks and kills without remorse. Special Agent William Perkins follows Martin’s trail of terror, desperate to capture him before he kills again. Martin’s family, mourning his disappearance for over 10 years, is informed that not only is he still alive, he’s responsible for the wave of murder sweeping through their town. Will they be able to reunite with their long-lost son before it’s too late, or will Perkins have no choice but to use excessive force to bring Martin down?

Malevolence 3: Killer stars Adrienne Barbeau, Ashley Wolfe, and Kelsey Deanne; look for it on Blu-ray/DVD and VOD beginning this October. 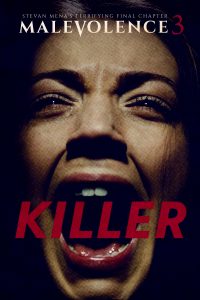 Synopsis:
It’s ten years after the kidnapping of Martin Bristol. Taken from a backyard swing at his home at the age of six, he is forced to witness unspeakable crimes of a deranged madman. For years, Martin’s whereabouts have remained a mystery…until now.

Synopsis:
The horrific account of 6-year-old Martin Bristol, abducted from his backyard swing and forced to witness the brutal crimes of a deranged madman.