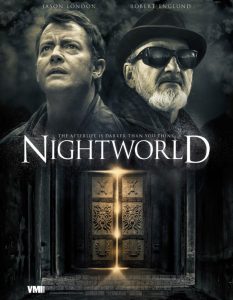 Before hitting the European Film Market in Berlin, VMI Worldwide have shared new sales art for their Robert Englund-starring horror Nightworld, the trailer for which you can watch below.

Shot in Bulgaria by Chilean director Patricio Valladares (Hidden in The Woods, Downhill), the English-language film was scripted by Dimitar Hristov, Milan Konjevic (Zone of The Dead) and Downhill writer Barry Keating.

‘90s favourite Jason London (twin brother of Mallrats’ Jeremy) leads the cast as former LAPD officer Brett Irlam, who uncovers dark secrets and malevolent forces in an old apartment building in Bulgaria. London is no doubt best remembered for Richard Linklater’s Dazed and Confused but has been crazy busy with genre fare of late, appearing in Combat Shock director Buddy Giovinazzo’s A Night of Nightmares, TV movie Shark Island and alongside Daryl Hannah in 2015’s Awaken.