Trailer for Netflix’s The Ritual is Ominous and Freaky

Netflix has put out a foreboding and intense trailer for The Ritual, an adaptation of Adam Nevill’s award-winning 2011 novel directed by David Bruckner (Southbound, The Signal).

The film, which sees four old friends head into the Scandinavian wilds for an ill-advised trek through the woods, was produced by MoCap extraordinaire Andy Serkis, under his The Imaginarium production banner. The adaptation was written by BAFTA nominated screenwriter Joe Barton. 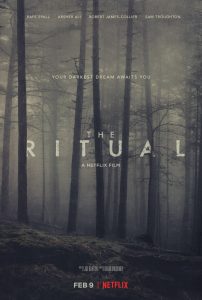 Synopsis:
Reuniting after the tragic death of their best mate, four old friends from university set out to hike through the Scandinavian wilderness. But a wrong turn leads them into the dark and mysterious forests of Norse legend, where an ancient evil still exists and stalks them at every turn.