The Trailer for The Love Witch is all about Sex Magic

This new trailer for The Love Witch is all about love, sex and magic as it pays homage to flicks from the 1960s. From the soundtrack, over-the-top production design and retro costuming to the glittery lighting and melodramatic acting, you’ll be easily fooled into thinking that this is a supernatural horror from 1960, not 2016. 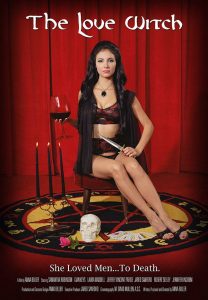 The Love Witch has been written and directed by Anna Biller and is her follow-up to 2007’s comedy-drama Viva, which is another throwback to the past. Despite its clear 60s style, The Love Witch is set in modern-day California and follows a witch who makes potions to make men fall in love with her. In true melodramatic style, it all goes a bit topsy-turvy when the men start dying.

The Love Witch will be screening at the UK’s Horror Channel FrightFest on Saturday 27th August and will be receiving a limited theatrical release in the USA on 28th October. Check out the sumptuous trailer below and you can read our interview with director Anna Biller right here.