Trailer Lands for Ti West-ern In a Valley of Violence 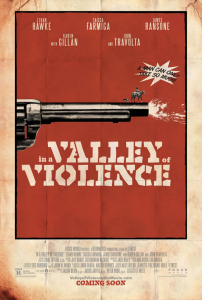 A thrilling trailer has landed for Ti West’s venture into Western territory: In a Valley of Violence. Starring John Travolta, Karen Gillan and Ethan Hawke, the film follows a stranger who makes quite the impact in a small town of misfits and nitwits.

In a Valley of Violence is most certainly not a horror film, but we are extremely interested to see what fresh thrills Ti West can bring to a western genre film. The director has already put a firm stamp on horror with The House of the Devil, The Innkeepers and The Sacrament, so his deviation into new territory should be eagerly anticipated.

Check out the trailer below which shows just minor touches of the violence that will be rightfully expected from the film. It looks tense and exciting, with Hawke’s hero character seeming to be a complex one with opposing morals.

In a Valley of Violence will be released in the USA on 21st October 2016.