The trailer has dropped for the found-footage German flick Heilstatten and it’ll surely ring some bells for those of you who have seen Grave Encounters. Similarly to the 2011 feature from The Vicious Brothers, Heilstatten follows a group of YouTubers who agree to spend 24 hours in a supposedly haunting building. Naturally, documenting their entire escalating and terrifying experience. 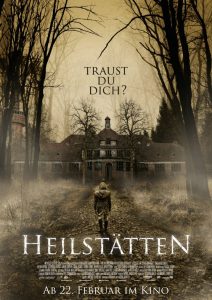 The trailer shows incidents that are expected; unexplainable noises, moving objects and doors slamming on their own. There also looks to be a tease of a body horror element, which looks slightly intriguing. Even without English subtitles it’s clear to gauge that the group have probably made a huge mistake in visiting Heilstatten. Still, it should be fun for us to watch right?

Heilstatten comes from director Michael Davide Pate and stars Sonja Gerhardt, Tim Oliver Schultz and Emilio Sakraya. The film will be released in Germany on 22nd February 2018. Look out for a review on our side of the pond soon.