Blumhouse is continuing its reign of terror, releasing eight brand new genre movies on Amazon Prime Video—the first four of which will arrive in time for Halloween! 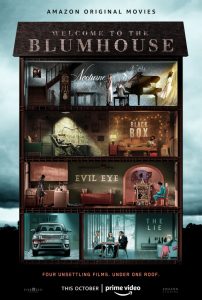 On October 6th, we’ll get writer-director Veena Sud’s The Lie, which sees two parents desperately trying to cover up a horrific crime after their teenage daughter confesses to impulsively killing her best friend—entangling them in a web of lies and deception. The film stars Mireille Enos (World War Z), Peter Sarsgaard (Orphan), and Joey King (The Conjuring).

Also releasing that day is Black Box, a film written and directed by Emmanuel Osel Kuffour Jr. The plot follows a single father who, after losing his wife and his memory in a car accident, undergoes an agonising experimental treatment that causes him to question who he really is. Mamoudou Athie (Underwater), Phylicia Rashad (Creed), Amanda Christine (Colony), Tosin Morohunfola (The Chi), Charmaine Bingwa (Little Sista), and Troy James (Scary Stories to Tell in the Dark) star.

Then, on October 13th, we’ll get Evil Eye from Elan Dassani and Rajeev Dassani. In the film, a seemingly perfect romance turns into a nightmare when a mother becomes convinced her daughter’s new boyfriend has a dark connection to her own past. Evil Eye is based on the award-winning Audible Original of the same name by writer Madhuri Shekar and stars Sarita Choudhury (Lady in the Water), Sunita Mani (Mr. Robot), Omar Maskati (Unbelievable), and Bernard White (The Matrix Reloaded).

Lastly, also on October 13th, we’ll be able to watch Nocturne, from writer-director Zu Quirke. The film is set at an elite arts academy, where a timid music student begins to outshine her more accomplished and outgoing twin sister when she discovers a mysterious notebook belonging to a recently deceased classmate. The cast includes Sydney Sweeney (The Handmaid’s Tale), Madison Iseman (Annabelle Comes Home), Jacques Colimon (The Society), and Ivan Shaw (Insecure).

The next four Blumhouse-produced movies will launch on Amazon in 2021. In the meantime, check out the teaser trailer for the first batch below!