Trailer For Takashi Miike’s Over Your Dead Body 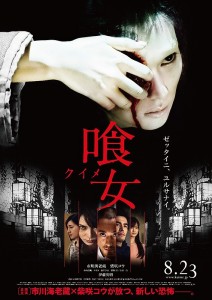 The first trailer for Japanese director Takashi Miike’s supernatural-horror Over Your Dead Body has been released and it looks like an absolutely gorgeous mind-meddler, to put it politely. Known for the shocking 1999 flick Audition, Miike is no stranger to messing with the minds of his audience and it seems that Over Your Dead Body is going to be another feature that muddles with one’s brain.

To counter the trailer’s beautiful cinematography there are few moments that hint at the violence and terror we’re going to be greeted with during the film. There’s a very bloody bathroom scene which throws in a bit of Ringu-likeness, there’s references to demons, a crying doll and a woman manically gauging out her eyes. There’s a lot going on and plenty of it is quite excruciating to watch, and we mean this in the most wonderful way possible.

We’re always keen to see the next in Japanese horror, as it is always so different and refreshing. There is an element of bravery and originality in Asian cinema, which is sometimes lacking in the horror we receive from Hollywood.

Over Your Dead Body was screened at FrightFest this year to mostly positive reviews, so we are definitely keen to get our hands on it when it gets an official release. For now, enjoy the trailer below.