Trailer for Pride and Prejudice and Zombies Kicks Undead Ass 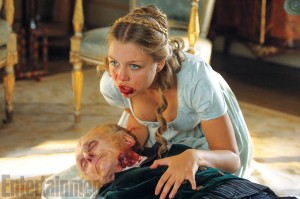 Pride and Prejudice and Zombies has been long slated for a film adaptation; originally David O. Russell was at the helm to produce with Natalie Portman starring. However, this ship has sailed and now we have Burr Steels directing and Lily James (Downton Abbey, Cinderella, Wrath of the Titans) in the lead role as Elizabeth Bennet. Also starring in the zombie-period drama is Lena Headey, Matt Smith, Jack Huston and Douglas Booth.

Take a look at the trailer below it boasts a beautiful, charming period setting with well-mannered, well-dressed young women. That is until a hoard of zombie approach and put a stop to the civilities. Elizabeth does say that to survive in this world one will need “other qualities” and these qualities include the ability to slash and kick one’s way through an undead army. However, one must remain classy and sophisticated throughout.

Pride and Prejudice and Zombies makes its way to cinemas in the USA on 5th February and in the UK on 12th February 2016; obviously, it’s the perfect date movie.