Trailer for Flesh of the Void Director’s New Short

Last month we showed you Sodom & Chimera Productions’ The Temple of Lilith, a gothic short from James Quinn, the director of nightmarish experimental deathtrip Flesh of the Void. When the film was released online, it was announced as a companion piece to Sulphur for Leviathan, a 13-minute film focusing on a nun who wrestles with her fantasies of lust and blasphemy. Described as “a satanic tale of unfulfilled desires, lust, blasphemy and existential dread,” Sulphur for Leviathan will hit the festival circuit this year. Right now though, we’ve got the first trailer for you, plus a couple of creepy-ass stills.

Sulphur for Leviathan stars Susan M. Martin as The Nun, Jerry Larew as Lucifer, Craig Long as Satan, and Joseph Knapik as a demon priest. 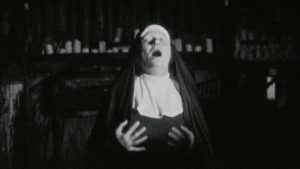 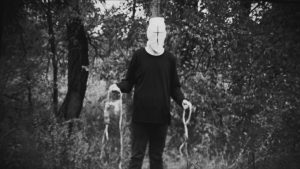 Director Quinn said of the film:
“Sulphur for Leviathan is a film that started out purely as an idea of rage. An outcry of anger against the anti-rationalism of the Catholic church, in this case not the more widely discussed controversies such as reoccurring cases of pedophilia and abuse, but rather the many moral codes they like to preach, like the commonly known ‘turn the other cheek’. While that may sound like a rather aggressive reason for a film, it is in its essence nothing but a piece of food for thought, intended to raise some questions about tough moral decisions that would be executed in a vastly different way outside of the religious concept.”