The Trailer for Daemonical will Send Shivers Down Your Spine 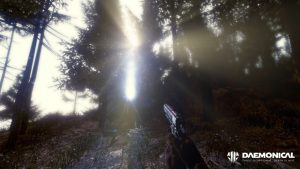 A trailer has been released for the asymmetrical multiplayer game Daemonical and it promises that it will send shivers down your spine. The game bears a strong resemblance to the recent Friday the 13th game, placing one character in the role of a demon while the others must either wait out the night and survive or exorcise the demon. The character in the demonic role has the night to kill the other 4 players. Game on!

Synopsis:
Take a role of a tourist running into a slaughtered team of demon hunters, and find yourself in a life and death battle against the evil force coming straight from perdition.

Enter a terrifying multiplayer horror experience featuring sessions of up to 5 players where each one of them has a potential to become the bone chilling demon that will try to slaughter the rest of the group.

It’s a great spooky concept and the gameplay looks like a lot of fun. As with Friday the 13th, this is sure to make for an intense and suspense-filled ride where no two games are ever the same.

The game is currently in alpha stage, but you can sign up for the alpha test here which will be released this winter.