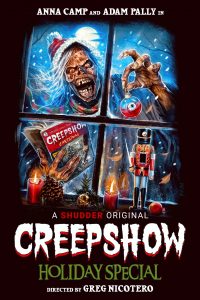 If you’ve been looking for some new holiday horror to get you in the festive spirit, Shudder has you covered with A Creepshow Holiday Special—a new hour-long episode of the popular anthology series releasing just in time for the holidays!

Titled “Shapeshifters Anonymous,” the holiday-themed episode follows an anxious man who, fearing he’s a murderer, searches for answers for his “unique condition” from an unusual support group. Creepshow showrunner Greg Nicotero wrote and directed the special, which is based on on a short story by J.A. Konrath (Last Call). Anna Camp (True Blood) and Adam Pally (The Mindy Project) star.

A Creepshow Holiday Special premieres on December 18th. Unwrap your present early by watching the trailer below!