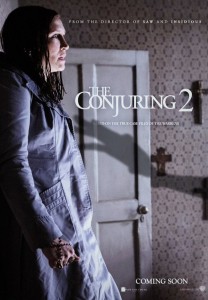 A new trailer has been unleashed for the follow-up to 2013’s The Conjuring and it takes Ed and Lorraine Warren on a trip to London to visit “England’s Amityville”. When they arrive they are greeted with a terrified family who believe their young daughter Janet is possessed. As the most documented case of paranormal activity, this one concerns the infamous Enfield Poltergeist which occurred in 1977.

Check out the scary trailer below which shows that there’s more to this story than just a simple haunting, because Lorraine’s vision suggests that the family is just a pawn in the evil entity’s wider plan to cause the Warren’s the ultimate pain. Filled with plenty of touches that you’d expect from James Wan (Saw, The Conjuring); sweeping shots and long-takes to build-up the petrifying tension, as well as shocking images of crucifix’s turning upside down and TVs turning on by themselves, The Conjuring 2 looks like a solid, sinister sequel to one of the most successful horror films of all time.

The Conjuring 2 has been directed by James Wan and stars, Vera Farmiga, Patrick Wilson, Franka Potente, Frances O’Connor and Robin Atkin Downes. It will be released in the USA on 10th June and shortly after in the UK on 17th June.