The trailer for Arq Shows a Repeating Home Invasion

A trailer has been unleashed for the Netflix original film Arq and it shows a couple re-living a terrifying home invasion over and over again. In a blend of sci-fi and home invasion tropes, Arq puts a refreshing spin on two ideas that we’ve seen fairly often in horror films. 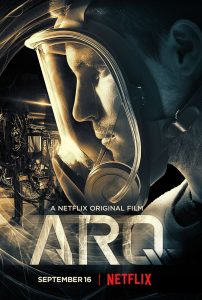 Synopsis:
In a future where corporations battle against sovereign nations over the last of the world’s energy supplies, young engineer Renton and Hannah find themselves attempting to save an experimental energy technology that could end the wars. The catch is, the technology has created a time loop that causes them to relive a deadly home invasion over and over again. They must figure out how to stop the time loop and come out of it alive.

Arq comes from writer-director Tony Elliot and stars Robbie Amell, Rachael Taylor, Gray Powell, Jacob Neayem and Shaun Benson. The film will be available on Netflix from 16th September, after premiering at the Toronto International Film Festival on 9th September.