The Trailer for Another Evil Questions the Real Threat

An intriguing, darkly comic and surprisingly unpredictable trailer has been unleashed for Another Evil, which is not quite the paint-by-numbers genre effort you’d expect from the generic sounding title. 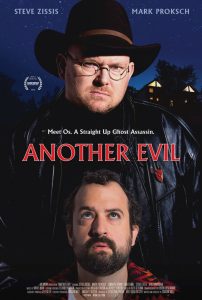 From writer-director Carson D. Mell, Another Evil follows a married couple who hire a “ghost assassin” to rid their home of the hauntings that are making their lives a misery. However, as the trailer shows, it seems that it’s not just the ghosts the pair has to be worried about, because this ghost hunter is a bit of a terror himself.

The trailer is an impressive blend of comedy and horror that has a couple of creepy supernatural moments coupled with tongue-in-cheek touches that poke fun at typical elements associated with haunted house horror films. We love the quiet terror that surrounds Mark Proksch’s ghost-hunting character and we think that the film’s witty, but unnerving vibe is extremely appealing.

Check out the trailer below and be sure to get your hands on Another Evil – which additionally stars Steve Zissis – when it receives a limited and VOD release in the USA on 5th May 2017.