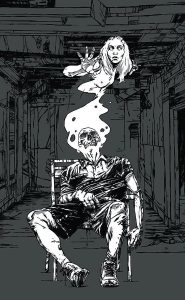 Tragic Tales of Horrere, the independent horror anthology from Little O and Madius Comics, was something of a surprise for me when it was released a few months ago. I often find anthology comics somewhat patchy and inconsistent, but writers Rob Jones and Michael Sambrook presented four interesting stories, each reflecting a different element of the horror genre. Issue #2, released this month, is of the same quality as issue #1, and though some stories worked better for me than others, the different tones and styles mean there’s something for everybody to enjoy – particularly those who like twist endings.

The weakest moment of the anthology is the first story, ‘The Thin Places.’ Neil Ford’s artwork is satisfyingly atmospheric, but the story itself – which follows two teenagers as they wander through a graveyard – feels a little unconvincing. As the shortest piece in the book, ‘The Thin Places’ lacks a sense of character development, leaving the readers feeling cold and removed. The story would benefit from being a few pages longer.

But ‘Tupper,’ about a group of survivors in a zombie apocalypse, is both tense and immediate, with characters that feel fully realised from the beginning. Written by Luis Rolden Torquemada, the story is rich and multi-layered, posing questions about violence as a means of survival. Diego Simone’s artwork is deceptively cartoonish, making these graphic moments of violence seem all the more shocking when they appear. 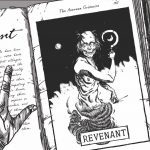 ‘The Gilded Cage’ is the story that has the most to say, exploring ideas of justice, retribution and an unending need for revenge. Taking place in a hospital for the mentally disturbed, the story focuses on patient Ambrose, a man whose violent past literally comes back to haunt him. Although some more back-story would help define the motivations of the characters more clearly, ‘The Gilded Cage’ is an interesting, intelligent story about violence – and one that feels, unfortunately, all too relevant in the world today. 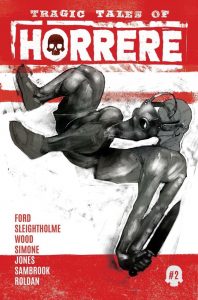 In my review of issue #1, I criticised the first part of ‘Grimoire’ for not focusing enough on the human characters of the story, but it seems my criticism was premature. Here, the characters have real depth, and bring an emotional weight to the anthology that is not present in the other stories. ‘Grimoire’ showcases the best of Jones’ and Sambrook’s writing, while Alistair Wood’s art is suitably gloomy and disturbing. The image of the Revenant, complete with corpse-like face and sagging flesh, seems to materialise out of a desert storm, evoking Biblical, and indeed Goetic, imagery. This is the greatest payoff in the book, and I can’t wait to see where the story goes in the next issue.

Tragic Tales of Horrere is a great example of a well-executed horror anthology. Of couse, not all stories work for me, but the fun of anthologies is that readers will be drawn to different stories, and Jones and Sambrook include enough tropes of the genre to keep everybody satisfied. If you’re looking for something gleefully spooky to sink your teeth into, Tragic Tales of Horrere just might be the comic for you.