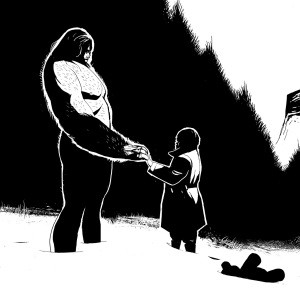 Maybe it’s because of my childhood obsessions with Tales from the Crypt and Are You Afraid of the Dark, but I’ve always had a special place in my heart for horror anthologies. The short story-like format, often ending on a cliff-hanger, has always been a successful one, particularly as it leaves the reader wanting more. The same can be said for comics, with different writers and artists adding their own unique twists on the genre. Tragic Tales of Horrere – an independent anthology from Little O and Madius Comics – effectively continues this tradition, and though some stories work better than others, it is extremely well put together by people who clearly have a lot of love for the horror genre.

All four stories in the book are co-written by Rob Jones and Michael Sambrook, giving a consistent tone to the comic as a whole. The artwork is different for each story and varies dramatically in style and tone, ensuring that fans of different types of horror will undoubtedly find something that they can enjoy. The letters page at the back of the issue, with its charmingly irreverent sense of humour, is another highlight of the book.

The first story, ‘If You Go Down to the Woods,’ is the weakest in the anthology, and at seven pages long, feels a little inconsequential. Though the high-contrast black-and-white art is impressive, the story relies on a twist ending that feels entirely predictable. 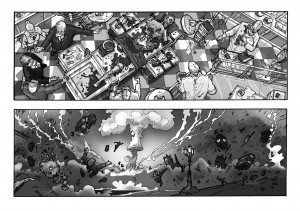 But the anthology turns around quickly afterwards, shifting to a gothic nineteenth-century aesthetic for the second story, ‘Aufhocker’. Alastair McLaughlin’s art is exquisitely rendered, with full-page panels of misty, rain-slicked streets. The twist at the end is both funny and unexpected, adding some humour to the dark tone of the anthology.

‘You Are What You Eat,’ is probably the most surprising story of the whole comic. I’ve often argued that zombies, much like werewolves and vampires, have been so overused in modern culture that it’s impossible to add anything new to them. But Jones and Sambrook’s take on zombies is both rich and engaging, posing some genuinely troubling moral questions to the reader. Gareth Sleightholme’s art is surprisingly evocative, and my only criticism of the story is that I wish it had been longer. 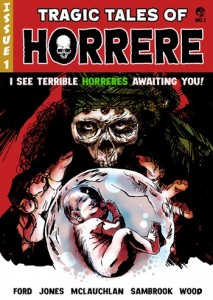 The anthology wraps up with ‘Grimoire,’ a kind of X-Files/American Horror Story hybrid. Considering the fact that it features ancient fortune-telling witches, possessed babies and satanic carnival freaks, I was disappointed that the story seemed somewhat underdeveloped. Although it’s the longest story in the book by a considerable margin, the characters remain relatively two-dimensional, but since it is to be continued in issue two, I’m willing to give it the benefit of the doubt.

As far as anthology comics go, Tragic Tales of Horrere is a solid compilation with some strong writing and consistently beautiful artwork. Although I didn’t enjoy all of the stories as much as I did the second and third, I would absolutely recommend this to fans of similar horror anthologies. If subsequent issues of Tragic Tales of Horrere are as intelligent, fun and surprising as this one, Jones and Sambrook may well have something of a classic on their hands, and honestly, there’s nothing even remotely tragic about that.