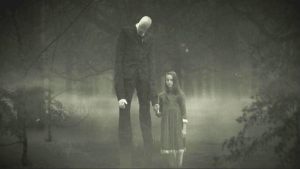 On May 31st, in the woods near Waukesha, Wisconsin, two 12-year old girls killed their classmate, stabbing her 19 times. When quizzed by police, they said that The Slenderman made them do it. The murder hit headlines and propelled the fabled online entity into the public consciousness.

The murder, and the Slenderman himself are the subject of a new HBO-produced documentary entitled Beware the Slenderman, which now has a trailer that you can watch below. The film is directed by Oscar-nominated documentary filmmaker Irene Taylor Brodsky, who gained exclusive access to the families of the two girls charged with the awful crime. Delving into the internet myth, Brodsky’s film explores the digital age’s dominance over the imaginations and sometimes actions of young people, and the blurred line between fantasy and reality.

Having played a number of 2016 festivals, Beware the Slenderman is set for release on January 23rd, 2017.