Synopsis:
The fourth in the fearless Toxic Avenger franchise is Citizen Toxie, a tale that is as bonkers, absurd and offensive as you’d imagine. This sequel finds our much-loved hero in an alternate dimension; having swapped places with his evil doppelganger The Noxious Avenger, who is causing chaos in Tromaville.

A crude and insulting tone is instantly set when the film begins at a school for special needs children. “Take a Mexican to Lunch Day” is ruined when the Diaper Mafia decide to wreak havoc and take the class hostage. Considering the previous three films, it should come as no surprise when an onslaught of unabashedly offensive dialogue is spewed from the villain’s lips. Most of it is so horrendous to listen to; I was pleasantly surprised to see that my ears did not start bleeding profusely. Citizen Toxie is an assault on the ears and eyes, an artless abomination of a film that is painful to endure. That is what you’ll have to do with this third sequel, endure it. In circumstances where torture is required, I recommend this to be played on loop and I imagine it will be very successful.

Films like this only work if they have an element of intelligence. There is absolutely nothing smart about insulting women or people with mental health issues, and this is all Citizen Toxie seems to be concerned with. The script appears to be written by someone who solely desires to offend, shock and repulse, rather than entertain. I understand the idea of shock cinema and love films that push boundaries, but Citizen Toxie is nothing more than a vulgar adolescent dream on-screen. The first Toxic Avenger film is far from perfect, but the idea of a bullied teen getting revenge is at least slightly engaging. Having reached this ludicrous instalment, all bets are off and all we have is an unwatchable mess that is disguised as a film.

The plot is minimal, but not terrible. The alternate universe is a nice idea and the subtle changes between the two worlds are quite entertaining. However, the narrative can do little to save this film from sinking lower and lower in to its schlocky and shocking barrel. Much of the film consists of unnecessary violence and gore, which by the fourth film, is no longer funny or shocking. It’s a struggle to understand what this film is trying to be or do, as we have already been victims of its satirical and brazen manner three times. By now, this is just self-indulgent and completely miserable, having lost any hint of fun or humour it may once have had. We are supposed to giggle at the conept of free coat hangers at an abortion clinic and a superhero named Master-Bater. Sadly, immature and tasteless humour is far from funny and I’d rather watch paint dry.

The special features on the Blu-ray are far superior to the film itself, they are overwhelming. If you’re a die hard fan of The Toxic Avenger there is plenty for you to get your teeth into. There is endless entertainment in the hilarious out-takes and some great behind the scenes footage. If you didn’t get enough blood, madness and chaos in the film itself, then Apocalypse Soon will provide you with much more. You won’t be able to get much closer to the film; there’s interviews galore, featurettes a-plenty and commentaries to give you even more insight in to the film. If anything, there’s too much!

If you enjoyed the previous sequels, I’m sure you’ll find loads to love here. For those of you who are sick and tired of The Toxic Avenger’s antics, perhaps give this a miss. The only thing more terrifying than this horrifying horror-comedy is the prospect of The Toxic Avenger 5, which is apparently on the cards. God help us. 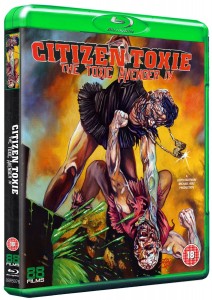