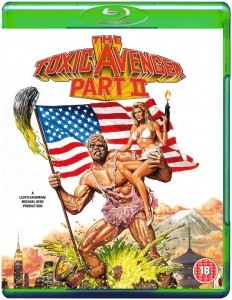 Synopsis:
With crime in Tromaville now at a record low, Toxie heads to Japan in search of his long lost father. However, while he’s away in the land of the rising sun, his home town becomes the target of an evil corporation intent on ruling by any means necessary.

Troma have had a chequered history on these shores, but then for a company who prides itself on independence then worldwide domination of the home entertainment market was never going to be easy. In the case of TOXIC AVENGER PART II we’ve been cradling our subpar Hollywood DVD budget copy for the last ten years or so, or in my own case it was Troma’s very own TOX BOX. Both editions however do little to transform the picture quality from the clunky old VHS we discovered Toxie on all those years ago, so when the UK’s 88 Films announced that all four TOXIC AVENGER flicks were getting the HD treatment, a collective Tromatic radioactive spill of excitement was oozed.

Much of the widespread disdain for this sequel seems to stem from the lack of continuity between itself and the original, but then the notion of Lloyd Kaufman embracing continuity is about as likely as a Troma movie without fart jokes. For this sequel Melvin Ferd III becomes Melvin Junko and Toxie mutates between being played by John Altamura (who was fired at some point) and Ron Fazio. Meanwhile his beautiful blind girlfriend Wanda transforms into Claire with Phoebe Legere assuming the role and his mother suffers a similar fate with Jessica Dublin replacing Sarabel Levinson. All of which may seem maddeningly intolerable to some, but knowing the way Kaufman plans, writes and shoots a movie such discrepancies are just fallout from the Troma machine and shouldn’t deter us from giving it the love it deserves.

The satirical edge of the original has diminished somewhat in this sequel in favour of the gonzo mayhem of a gore-laden light-hearted romp. THE TOXIC AVENGER PART II has an utterly absurdist feel, a vibe that Troma embraced more often in pictures such as TERROR FIRMER and CITIZEN TOXIE, and for me that defines it simply as 109 minutes of cartoonish indulgence, and that’s something that should be embraced.

88 Films have released a solid Blu-ray into the UK marketplace with the films appearance in glorious 1080p finally managing to shrug off the inferiority of the aforementioned variety of home entertainment releases. The 2.0 sound mix is retained, but real attraction is of course the 1.78:1 widescreen print which fills the screen with all the Tromatic goodness you could wish for. We have it uncut as well – a noted bone of contention in the US as its variety of incarnations have flitted between a shortened directors cut and the version we have here. The extras here are a little disappointing as save for the 88 Films trailer reel they’re all available on other versions. Kaufman’s 15 year old introduction which bombastically welcomes us to the DVD special edition seems particularly ill-fitting on this lush special edition, but it’s a minor gripe that adds a mere blemish to a release that should be celebrated.