Tour Camp Crystal Lake With This Footage from Friday The 13th: The Game

The crowd-funder for Friday The 13th: The Game is coming to a close very soon – Friday The 13th of November, unsurprisingly – and it’s still a few thousand away from its target. You can check it out here with all the great rewards that include having dinner with a load of horror icons and a physical copy of the game.

The game was at first being developed under the title ‘Summer Camp’ but this was soon scrapped for the more on-the-nose title, Friday The 13th: The Game. Kane Hodder will be reprising his role as Jason Voorhees for the game – hooray! When speaking about this choice, co-creator of the game Wes Keltner said, “Several people have worn the mask, but in our eyes, there was only one. Kane has the body type, the presence and demeanour that personify the unrelenting, undying killing force we’re after”. Kane Hodder is, obviously, the perfect man for the job.

The game play sounds like a lot of fun and, fear not, there’s a way to defeat slasher Jason and escape the wrath of his machete; you can escape on a vehicle, fix a phone and call the police or literally put an end to him. We do not think the final option will be very easy, though. In typical slasher horror film fashion you are advised to split up and it is up to you, and you alone, to survive. 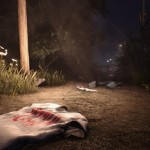 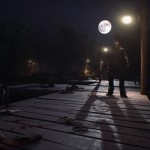 Take a look at the images (above) and video (below) to get a taste of the dark, eerie Camp Crystal Lake we’ve all come to know and love.
Share this...