Tour a Haunted Abbey in Latest TV Spot for THE NUN

The Nun is being billed as the darkest chapter yet in The Conjuring franchise launched by James Wan in 2013, and the latest TV spots has us believing it! The demon Valak reveals itself in what amounts to a nerve-shreddy, 30-second tour of a haunted abbey in Romania. Give it a spin with the lights out—if you dare! 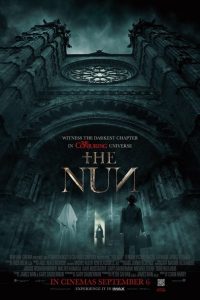 When a young nun at a cloistered abbey in Romania takes her own life, a priest with a haunted past and a novitiate on the threshold of her final vows are sent by the Vatican to investigate. Together they uncover the order’s unholy secret. Risking not only their lives but their faith and their very souls, they confront a malevolent force in the form of the same demonic nun that first terrorised audiences in The Conjuring 2, as the abbey becomes a horrific battleground between the living and the damned.

The Nun is directed by Corin Hardy from a script penned by James Wan and Gary Dauberman; the film stars Demián Bichir, Taissa Farmiga, Bonnie Aarons, and Jonny Coyne. Look for The Nun to begin haunting US Theaters on September 7th.