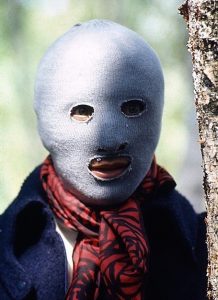 In Perugia, a masked killer stalks a group of female college students, punishing them for their sexual proclivities. Jane (Suzy Kendall) and her friends have suspicions about who the killer might be, and decide to get away from the university until the murderer is caught, staying – for the time being – in a villa out of town. Everything here seems idyllic, but it soon becomes apparent that the killer knows where they are, resulting in a home invasion in which the girls are picked off one by one.

Torso is an interesting film, one that delights in playing with the audience’s expectations. I was irritated, for the first hour or so, at the film’s relentless misogyny; the female characters are rarely presented as anything more than objects. But in the third act of the film – and particularly when the killer’s motives are finally revealed – it becomes clear that Martino wants us to view the women in this way, effectively making us complicit in the murders. The female characters are all highly eroticised, and the camera – constantly lingering over their body parts – aligns the audience with the killer, forcing us to see them exactly as he does.

As such, Torso is far more self-reflexive than I had assumed, examining the ways in which women in horror films are often seen as disposable victims. The killer, dealing with latent childhood trauma, views women as objects, as “bitches [who will] do anything to get what they want.” He is not only intent on killing them, but dismembering them too, reducing their bodies to their component parts. In one scene, the killer hacks up his victims with a saw as Jane cowers in the adjoining room. This sequence is the most striking within the film. The camera flits between extreme close-ups of the victim’s body parts, the killer’s hands and Jane’s face, all of which can only ever be partially seen. By filming them in this way, the film itself suggests an ambivalence towards the individual characters; like the killer, the audience is forced to consider the women as little more than the sum of their anatomy. 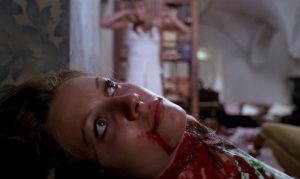 But that’s not to say that Torso is perfect when it comes to its representation of women – even in the final third of the film. The audience is certainly meant to sympathise with Jane at the villa, particularly after the other women have been killed off. The camera (unlike most other horror films) never stands in for the eyes of the killer, and everything we see is very clearly from her point of view. But while Jane is intelligent, brave and certainly the most capable female in the film, she still doesn’t really do very much, relying on a man to rescue her in the final scene. Of course, this does make logical sense within the narrative, but by presenting Jane as a largely passive character, it does undermine some of the efficacy of the film as a whole.

Similarly, the pacing of Torso is all over the place, particularly in the first hour of the film. Martino’s script is littered with clues and red herrings, and there are lots of ominous reaction shots that all appear to be terribly meaningful. Largely this works – I admit I had no clue who the killer was – but with so many red herrings, the overall plot often gets lost, and the audience are never sure who or what to focus on.

Like their other recent releases of Sergio Martino’s films, Shameless’ Blu-ray of Torso is beautiful to look at, with superior sound and image quality to other versions of the film. The transfer is a little grainy in parts, but this is rarely distracting, and is a vast improvement over previous editions. 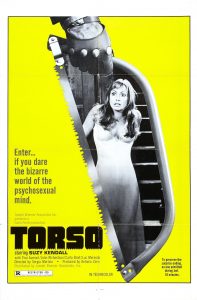 Torso is a film that often gets written off as a sleazy exploitation film, and while any scene taken out of context would certainly qualify as such, I think the film is far more intelligent than given credit for. Although it’s far from perfect, the last third of the film more than makes up for any misgivings the audience might have, and the finale is so tightly paced and plotted that it’s hard not to remain on the edge of your seat – even after the killer has been revealed. For established fans of Italian giallo films, Torso really is a cut above the rest.