Candyman is one of my favourite horror films; it’s terrifying and beautiful, romantic and chilling, all at the same time. If any horror film needs a 4k restoration, it’s this one. Tony Todd replied to a fan’s tweet about being unable to buy Candyman with the following:
“Wait for the new 4k restoration of #Candyman w off screen commentary w @BernardJMRose coming soon”

How soon is soon?! Being released in time for Halloween would be excellently fitting, but perhaps Christmas seems more likely. What about Valentine’s Day for the twisted romantics out there? 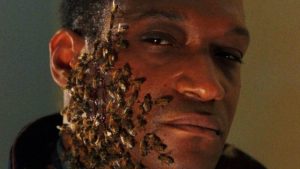 Released in 1992, Candyman follows the sinister Candyman, played by the brilliant Tony Todd, a tortured soul with a hook for a hand. He arrives to those that say his name thrice into a mirror, to avenge his death and the demise of his love during life.

Bernard Rose directed the flick that also has 2 sequels. I’ve not seen the third, but the second is a decent follow-up.