That’s right; Tony is set to fight zombies in the aptly-titled horror Zombies, which leaves very little to the imagination. I suppose it’s a treat to have a title spelled out so clearly, so we know exactly what to expect. 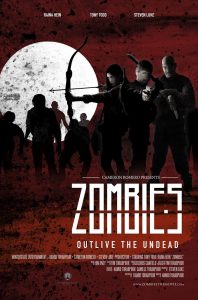 Tony Todd has been starring horror films for what seems like forever and he’s fantastic, so we hope he never stops. My personal favourite role of his is Candyman, but he’s also starred in Night of the Living Dead, Hatchet , The Crow, Wishmaster and Bernard Rose’s fantastic adaptation of Frankenstein.

Synopsis:
When the world is in shambles, plagued by a zombie outbreak, only the strong will survive, but just how much determination will it take? Will Luke and his crew have enough ambition and ammunition to stay alive long enough to save the human race?

Zombies comes from writer-director Hamid Torabpour and additionally stars Raina Hein, Steven Luke and Aaron Courteau. The film will receive a limited theatrical run on 21st October in the USA.