It’s been a good eight months since the first teaser (not to mention the stunning one-sheet) for intriguing indie slasher Tonight She Comes dropped, during which the film enjoyed a long festival run. With the film now readying itself for a wider audience, we can have a look at the full-length trailer.

The second feature from writer-director Matt Stuertz (who previously helmed little-seen 2015 sci-fi horror RWD), Tonight She Comes stars feature newcomers Jenna McDonald and Dal Nicole, along with Frankie Ray (The Horde, Devil’s Playground) Adam Hartley (The Slender Man) and Larissa White. The film features a pulsating score by Wojciech Golczewski, who is becoming something of a genre hero due to his stellar work on the likes of We Are Still Here, Late Phases and Beyond The Gates. 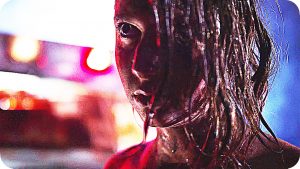 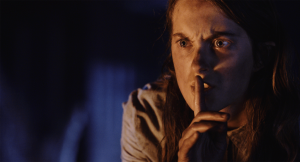 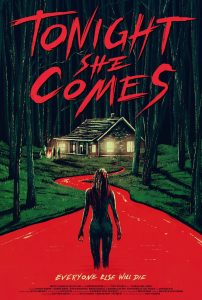 Synopsis:
After a girl goes missing, two of her friends and a mysterious set of strangers will find themselves drawn to the cabin in the woods where she disappeared. They will laugh, they will drink, they will kiss, they will fuck, and THEY MUST ALL DIE.

Keep an eye out for Tonight She Comes later this year.