Suave troublemaker Tom Six may be busy in post-production on his LA-set horror The Onania Club, but he’s not ready to move on completely from his most notorious creation. Taking to Twitter, the director has revealed the a graphic novel based on his 2009 attention grabber, The Human Centipede (First Sequence).

Six wrote: “We don’t have the right deal with a distributor yet but the graphic novel of the first Human Centipede is fucking ready for world domination!”

You can get a sneak peek at the (presumably very) graphic novel below. 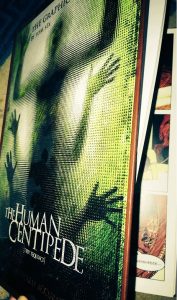 Hopefully Six will strike a release deal soon. It’d be good see further volumes, featuring all the filth and depravity of the second and third Human Centipede films.