Tom Hardy Has a Parasite in new Venom Trailer

A brand new trailer has been unleashed for the Tom Hardy-starring Venom and it showcases much more from the title character. There are some great moments of visuals, a tease of the wit that will coincide with the action-horror and plenty, plenty of Venom itself.

The film’s plot is said to be inspired by the story of 1993’s Lethal Protector six-issue miniseries, which begins with Spider-Man and Venom coming to a truce, agreeing that Venom will move to San Francisco. The trailer shows Hardy coming to terms with his merge with the symbiote, admitting that he has a “parasite” within him.

Additionally, check out the awesome, gruesome Japanese poster art for Venom below. I wonder if we’ll be treated to something so terrifying. 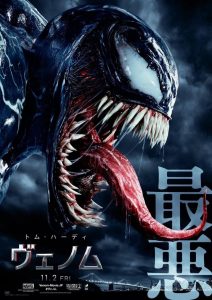