Tom Hardy Dons His Dark Side in the New Venom Trailer 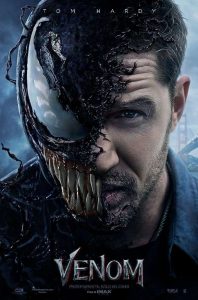 Tom Hardy’s Eddie Brock has finally showed us his dark side in the new trailer for Venom. Sony has rightfully fixed the mistake of the first trailer by showing us Venom in all his scary glory. Although the film doesn’t appear to be the R-rated horror-fest we were once promised, it does offer plenty of action and wit.

The film’s plot is said to be inspired by the story of 1993’s Lethal Protector six-issue miniseries, which begins with Spider-Man and Venom coming to a truce, agreeing that Venom will move to San Francisco. The trailer shows Hardy coming to terms with his merge with the symbiote, struggling to contain “the voice in his head” that is desperate for control.

Venom will be unleashed on the 5th October 2018.