TOIL AND TROUBLE ARE AFOOT IN WICKED WITCHES’ TRAILER 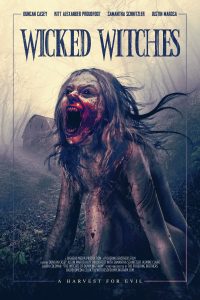 Something wicked this way comes! Wicked Witches, a new horror film from Mark and Martin Pickering, will be screening in select cities and arriving on VOD and DVD on August 9th—and the trailer conjures up some scares.

In the film, Duncan Casey plays Mark, an Irish man who finds himself back at Dumpling Farm in England after his wife kicks him out the house for his promiscuous ways. While he has fond memories of the farm, something seems a little… off. For one thing, his old friend Ian has been possessed by demonic, flesh-eating witches. And they have their sights set on consuming Mark’s soul.

Justin Marosa and Samantha Schnitlzer co-star in the flick, which is being released by Midnight Releasing. Get bewitched by the trailer below.