Further to writing and directing the Warner Bros. supernatural feature The Apparition, Todd Lincoln’s latest offering is literally buried treasure, included as a surprise transmission after the end credits of V/H/S: Viral. Lincoln’s experimental, high-fashion horror short, Gorgeous Vortex, stars Victoria’s Secret model Jayden Robison as a woman plagued by her past and on the run from an elite secret circle. The film’s effectiveness is also perfectly bolstered by a haunting score orchestrated by Joseph Bishara (The Conjuring).

Whilst Gorgeous Vortex was not included when V/H/S: Viral was first unleashed, it can now be found on the DVD, Blu-ray and also on the purchased (not rented) version from iTunes. To celebrate the release of V/H/S: Viral in its full entirety SCREAM’s Howard Gorman got a chance to pick Lincoln’s brain all about his designs to mix things up and create a film that diverts the franchise into a whole new direction. 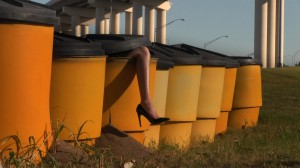 SCREAM: Todd, Gorgeous Vortex was the “secret” or “lost” segment. How did you become attached to V/H/S Viral and was your piece always kind of intended to be the secret segment and how did you feel about it being an added extra rather than part of the actual film?

Todd Lincoln: It’s funny how I got involved. One of the V/H/S producers approached me while I was devouring cookies in the Topanga Canyon mall. He told me they were doing a third V/H/S film and asked if I had any ideas. So I started listing off my wish list of directors that I thought he should get for the new lineup. *laughs* I was in fan mode, producer mode and mall mode. And he said, “No man!!! What would YOU do as a director with V/H/S?” I wanted to create something that was different, both tonally and stylistically, than what had been previously done in V/H/S segments. It felt like it was time to burn the forest for regrowth. Gorgeous Vortex is a secret film for the hardcore fans and the true diggers. The plan was for my film to be the surprise final segment of V/H/S: Viral. Its positioning on the Blu-ray/DVD is a throwback to the way that ‘90s CDs for bands such as Nine Inch Nails, Nirvana and Ministry would have a hidden track after the end of the album. Gorgeous Vortex hints at a larger mythology and points to a new direction for the V/H/S franchise.

SCREAM: I understand you actually had three different concepts for V/H/S. Can you tell us a little about the ideas for the other two and if you will be doing anything with those two ideas in the future?

TL: Yes, that’s correct. The other two concepts were really fun and far out. Unfortunately I can’t discuss those because I’m incorporating aspects of them into my next project.

SCREAM: The aesthetic of the film definitely toys with the senses. It’s a rare blend of fashion photography and horror. You say that the producers of V/H/S Viral chose yours as the secret segment to show a new direction for the saga. Does this mean that V/H/S will take on more of this artistic style of filmmaking, should another entry be released?

TL: Thank you. I’m glad you appreciated my special blend. The producers and I discussed a new style and direction for the franchise, but ultimately it’s up to them where they want to take V/H/S next. I’ve always thought the segments should be shot on VHS tape.

SCREAM: The whole short leaves everything very much open to the viewer’s imagination, by and large given its dreamlike atmosphere and jumping around. Was that your intention and where did these dreamlike scenes come from in your head? A couple of films that came to mind were Stanley Kubrick’s Eyes Wide Shut and George A. Romero’s Bruiser with the white masks and imagery and what not.

TL: Personally, I have a completely different experience and opinion of Gorgeous Vortex with each viewing. It’s best to leave the film up to individual interpretation. Perhaps it’s an assemblage of memories, dreams, simulations and surveillance. Or maybe it’s ominous transmissions from another time or dimension. My editor, Ed Cardenas and I took a kind of Dadaist or Burroughs-esque cut-up approach to the narrative drive. I wanted to create a visceral, visual onslaught served up in a post-human way. I can’t explain where many of my ideas come from; I simply shoot the things that I want to see or that I think others should see. As I was putting together Gorgeous Vortex I kept thinking of Walter Murch’s quote about working with George Lucas on THX-1138. Murch said, “What we were interested in doing was making a film from the future rather than about the future.”

SCREAM: And as it’s so open to the imagination, have you heard many unexpected interpretations from anyone who has seen the film so far?

TL: Yes, I’ve heard all kinds of interpretations. They’ve been fascinating and inspiring. Some of them even sounded cooler than what I intended. 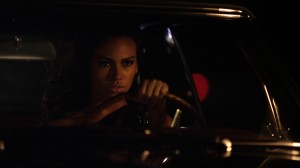 SCREAM: Something that adds so much to the whole atmosphere is Joseph Bishara’s soundtrack. Obviously he’s proved very popular for his work on The Conjuring and Insidious. What made you decide on Joseph for this particular project?

TL: I’ve known Joe for years from seeing him around L.A. at different horror film events. We get along well and I greatly admire his work. He and I had talked about finding a project to collaborate on. When I began planning Gorgeous Vortex I thought he would be the perfect fit as composer. His sophisticated, original score brought so much to the film and really enhanced it. I’m also excited about his recent release of the Gorgeous Vortex soundtrack album on vinyl and digital download. http://shop.voidrecordings.com/

SCREAM: And what was it about Jayden Robison that caught your eye as the lead actress? I’m guessing it was the fact that she was seductive yet feral at the same time. How eager was she to take part when you approached her for this complex role? Why did you choose her over some more well-known actresses I know approached you to take on this role?

TL: My casting director, Matthew Lessall and I looked through all the actress submissions and dug deep at the talent agencies. I was determined to find a fresh face. Jayden Robison had a really striking look. Once I spoke with her I discovered that she really understood the role and connected with it. She was ready to give it everything she had. She possessed a beautiful combination of strength, fierceness and vulnerability that added unexpected layers. There is a great sadness and darkness to this film and she was willing to dive into the abyss.

SCREAM: Vincent Guastini’s creature effects are particularly striking. His effects studio has done some amazing work on films ranging from Silent Night, The Taking of Deborah Logan to Requiem for a Dream. Was there some specific work he had done before that made you choose him and did you have an exact idea of how you wanted the creature to be?

TL: I’ve been a longtime fan of Vincent’s work. He and I have come close to working together several times. He and his crew at V.G.P. Effects & Design Studio submitted concept art for past studio films I developed such as The Fly and Hack/Slash. I knew that Vincent and his team would bring 110 percent. They kill themselves for the movies. For Gorgeous Vortex, Vincent assembled some of the best creature effects artists, sculptors and technicians around including Joshua Ballze, Josh Wasylink, Mike Rotella, Steve Winsett and Evan Campbell. At first I didn’t know exactly how I wanted the creature to look, but I had a pretty good sense of it. I loaded Vincent up with brainstorm notes and visual references for the creature. The V.G.P guys went above and beyond on the design and operated it beautifully. It was so thrilling to see it come to life and to achieve it entirely with practical effects. It definitely makes me want to do more creature stuff.

SCREAM: I have read that some producers are interested in turning Gorgeous Vortex into a feature film. That said, is it true that you would prefer to keep it as a short film or will you go ahead with the feature film project? Personally I’m not sure if such an artsy piece would work as a feature film and you would probably need to change things somewhat. Do you agree?

TL: I have a lot of ideas on what the feature film version would look like but there’s something cooler about having Gorgeous Vortex continue to stand alone as a short film. Certainly I’m a fan of shorts that have been turned into features such as THX-1138, LE JETEE, DISTRICT 9, BOOGIE NIGHTS and THE EVIL DEAD. Most of those shorts are ones that people would never have imagined could become features, but I don’t think a film has to be feature-length to be official. In punk rock terms… it’s better to play a short set, smash your guitar, get off stage and leave people wanting more.

SCREAM: Horror anthologies are really picking up of late with V/H/S and The ABCs of Death and various others on the way. They tend to have people divided as they are often a mixed bunch of hit and miss shorts. Why would you say they are definitely part of the zeitgeist right now? 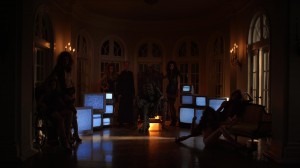 TL: Well everything comes in cycles but the popularity of this latest wave of anthologies is probably helped out by people’s increasingly shorter attention spans and too many options in our digital queues. These V/H/S cinema snacks are a perfect fit for a new generation raised on YouTube clips, apps, micro-games and mash-ups. Also, audiences are starving for something different than what they’re getting from most studshopio horror features. The V/H/S films are like cool mix-tapes or sampler albums for a new wave of horror, allowing you to see behind the curtain into the possible future of the genre and pick your poison.

SCREAM: Something that surprised me is that you were inspired by George Lucas’ early work and what surprised be more so was that you drew a lot of inspiration from the book ‘Dennis Hopper: Interviews.’ What inspiration did you draw from these specifically?

TL: I continue to be inspired by the unique style of off-compositions, off-editing and sound design in George Lucas’ early experimental short films. And yes, reading the book “Dennis Hopper: Interviews” helped me get through Gorgeous Vortex. Dennis Hopper’s words reminded me to trust my gut, cancel out all the noise and push things further.

SCREAM: I believe you are preparing a new psychosexual sci-fi thriller. Can you tell us a bit about that and anything else you have in the pipeline?

TL: I can’t discuss that one yet, but I’m really excited about it. It’s going to surprise people. I’m hiding out in research/development mode. Also, I’m exploring new forms of storytelling and world-building in other mediums such as real- time mobile augmented reality. In the meantime, keep checking up on www.gorgeousvortex.com for new side-story micro-films that tie in with Gorgeous Vortex.

SCREAM: Thank you so much for talking about Gorgeous Vortex with SCREAM Todd.

TL: Thanks so much for the great, thoughtful and fun questions Howard.

We’d like to thank Todd for taking time out to speak with us and we’ll leave you with an exclusive teaser for his surprise V/H/S Viral segment:

You can keep up with all of Todd Lincoln’s latest projects by following him over on Instagram (https://instagram.com/killtoddlincoln) and Twitter (@Todd_Lincoln).