Timo Tjahjanto Shares First Image from May the Devil Take You

Timo Tjahjanto (pictured above) has taken to social media to share the first official image from his next horror dish titled May the Devil Take You. The image shows Pevita Pearce in her role of Maya. If the image is anything to go by, her role is going to be a brutal and bloody one.

Along with Kimo Stamboel, Tjahjanto makes up the directing duo known as the Mo Brothers. They have directed 2014’s brutal and unforgettable Killers, the Iko Uwais-starrer Headshot and 2009’s horror Macabre.

Tjahjanto has additionally directed segments from V/H/S/2 – Safe Haven – and The ABCs of Death, where his offering L is for Libido particularly stuck out. It was gruesome and bold and if you’ve seen it, you’ll know why.

Check out the image below and be sure to keep an eye out for more details surrounding May the Devil Take You. 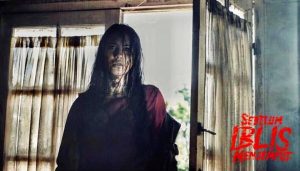