With the long-delayed adaptation of Albert Sanchez Piñol’s 2002 best-seller Cold Skin finally on its way to us this year, this chilling new poster has arrived. 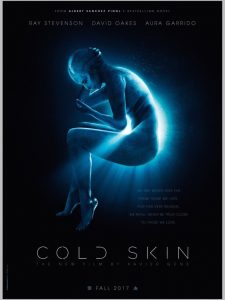 The film comes from Frontier(s) director Xavier Gens, who took on the project following the departure of original director David Slade (Hard Candy, 30 Days of Night), who was attached when the adap was conceived back in 2009. The script, by Carriers writers Alex and David Pastor, was also dropped, with 28 Weeks Later scribe Jesús Olmo brought in to rewrite. After a further two years spent in development Hell, the dark tale of isolation and madness finally went into production, wrapping photography last summer.

Here’s the ominous official synopsis:
On the edge of the Antarctic Circle, in the years after World War I, a steam ship approaches a desolate island far from all shipping lanes. On board is a young man, on his way to assume the lonely post of weather observer, to live in solitude for a year at the end of the world. But on shore he finds no trace of the man whom he has been sent to replace, just a deranged castaway who has witnessed a horror he refuses to name. The rest is forest, a deserted cabin, rocks, silence, and the surrounding sea. And then the night begins to fall… 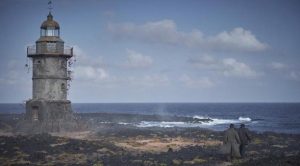 It will be sailing our way in the Autumn.