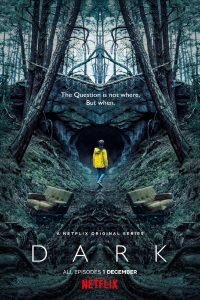 Netflix’s upcoming show Dark is getting a lot of buzz. The German series, described by the streaming giant as “cerebral, mind-bending, [and] ominous,” has invited some comparisons to Stranger Things, although I think it would be wise to expect something wholly different. The series will debut on December 1st and now, we’ve got our first full trailer, plus some brand new artwork.

Louis Hofmann, Oliver Masucci, Karoline Eichhorn, and Jördis Triebel star in the series, which was created by director Baran bo Odar and writer Jantje Friese. It is set in the present day in a small German town, where two young children have disappeared. We are told however, that a narrative twist takes the town back to the 1980s.

The supernaturally tinged show will run 10 hour-long episodes. Below is the official synopsis:
The disappearance of two kids in the small German town of Winden opens abysses that turn the concept of time on its head. The question is not who has kidnapped the children… but when.