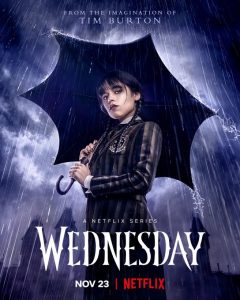 We’ve been eagerly awaiting news of when Tim Burton’s Wednesday will hit Netflix, and we’ve finally got our answer! The live-action series will debut on November 23rd, 2022.

Jenna Ortega (Scream) stars as Wednesday Addams in the series, which is described as a “sleuthing, supernaturally infused mystery charting Wednesday Addams’ years as a student at Nevermore Academy.” The series will follow “Wednesday’s attempts to master her emerging psychic ability, thwart a monstrous killing spree that has terrorized the local town, and solve the supernatural mystery that embroiled her parents 25 years ago—all while navigating her new and very tangled relationships.”

Wednesday was written by Alfred Gough and Miles Millar, who also serve as showrunners, with Tim Burton directing.