Till Death do they Part; New Sales Art for The Russian Bride 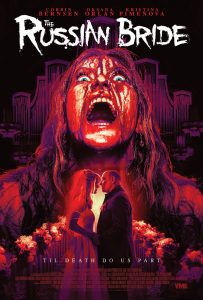 A blood-soaked new poster has been unveiled for The Russian Bride and it has more in common with Carrie than it does with your typical film about a wedding. Considering the film has been described as a mix between The Shining, it should be unsurprising to see it have similarities to even more King stories.

The Russian Bride comes from director Michael S. Ojeda (Avenged) and follows a woman from Russia who accepts a marriage proposal from a reclusive billionaire in the hopes of creating a better life for her and her daughter. She soon realises that she’s made a huge mistake, because the man’s a bit of a nutter.

Remind yourself of the intriguing trailer below, which boasts beautiful cinematography and an intriguing visual style.

Look out for a release date soon.