In addition to creating the iconic posters for films like Gremlins, Young Frankenstein, and E.T., the late John Alvin also designed the poster we all know and love for 1987’s The Lost Boys. But that poster wasn’t the only one Alvin created for the film.

Bottleneck Gallery have partnered with the Alvin Estate and Justin Ishmael to release three of Alvin’s unused early design concepts for The Lost Boys for the very first time. Fans in New York City can get their hands on two of the designs at a May 31st screening of the film at The Roxy Theatre, with the remaining posters in the limited run going on sale on Bottleneck’s website on June 4th. The third design, featuring an idyllic image of a house in the murder capital of the world, will also go on sale online at that time. 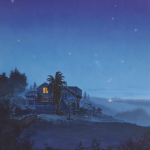 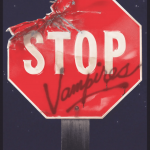 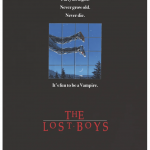 Whether or not you need a sweet new poster for your home, it’s wonderful to see more of this fantastic artist’s work gaining a wider audience. Alvin created dozens of concepts for The Lost Boys’ poster before the studio settled on the red, collage-style image we’re familiar with today.

To round out the vampiric offering, Bottleneck and Ishmael are also releasing prop replicas of two comics seen in the film: Vampires Everywhere and Destroy All Vampires. Each comic will feature the four double-page spreads made for the movie, along with the original line work. Pre-orders will also be available online from June 4th.