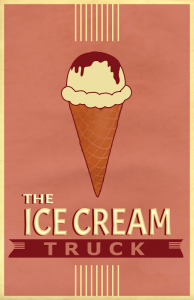 A tasty trio of new cast members have jumped on-board The Ice Cream Truck, a slasher from writer-director Morgan Freels-Johnston (Rebound). Her previous endeavour was a brutal horror effort and this one is said to be inspired by the works of David Lynch and Roman Polanski, so expect something more hard-hitting than its poster and cheery title would suggest.

Synopsis:
Mary’s husband gets relocated for work which allows her to move back to her suburban hometown. As her family ties up loose ends back home, Mary (Deanna Russo) moves into their new house all alone and ….waits. Although her familiar suburb is a constant reminder of her youth, something seems strange. A local Ice Cream Man with a love of nostalgia starts to kill some of her neighbours. Mary is torn between her mature instincts that something is wrong and the distracting memories of her younger days.

The Ice Cream Truck has its arrival slated for 2017.