Threats Are Made in New Clip from Unsane

A brand new clip has been released for Steven Soderbergh’s Unsane, a film shot entirely on an iPhone. The clip shows the film’s stars Claire Foy and Juno Temple in a heated war of words. It teases the film’s main preoccupation with insanity and rationality; is Foy’s character truly going mad or is there a conspiracy? 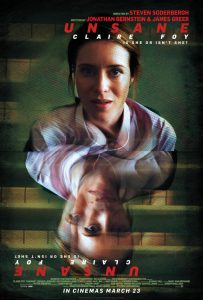 Unsane follows one woman’s descent into madness as she spends longer in the facility she believes she does not belong. When she’s faced with her greatest fear, will she finally succumb to the insanity or prove that she is definitely all there?