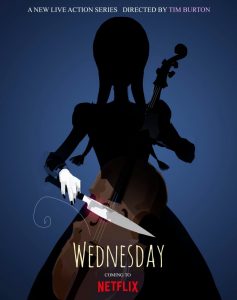 Thora Birch (The Walking Dead) has dropped out of Wednesday, Tim Burton’s live-action series for Netflix that will follow beloved character Wednesday Addams’ “spooky coming-of-age” at the Nevermore Academy.

Deadline reports that Birch, who had finished filming the bulk of her role, had to step away for personal reasons. Birch was set to play Tamara Novak, “Wednesday’s dorm mother and the only ‘Normie’ at the Nevermore Academy with a focus on all things botanical.” The article adds that the role “will not be recast, with producers looking to add a new character to the show’s first season… It is unclear whether that character will take over for Tamara and help close out her planned storyline with both of them co-existing on the show or whether the new character will replace Tamara and Birch’s scenes will be reshot.”

Described as “a sleuthing, supernaturally infused mystery,” Wednesday will follow the titular character’s attempts to master her emerging psychic ability, thwart a monstrous killing spree that has terrorised the local town, and solve the supernatural mystery that embroiled her parents 25 years ago, all while navigating her new and very tangled relationships. Jenna Ortega (The Babysitter: Killer Queen) will play Wednesday Addams, with Luis Guzmán (Traffic) and Catherine Zeta-Jones (The Haunting) playing her parents, Gomez and Morticia. Isaac Ordonez will play Pugsley Addams, Victor Dorobantu will play Thing, and George Burcea will play Lurch. Gwendoline Christie (Game of Thrones) was recently announced as Larrisa Weems, Nevermore Academy’s principal, who still has an axe to grind with former classmate Morticia.