From director Mike P. Nelson (The Domestics), the Wrong Turn reboot is slated for a one-night-only theatrical release on January 26th, 2021—and the German poster art introduces a new masked villain! 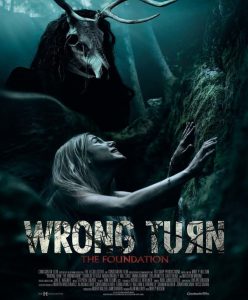 Franchise creator Alan McElroy wrote the film, which will follow a group of friends hiking the Appalachian Trail. After straying off the beaten path, the hikers are confronted by “The Foundation,” a community of people who have lived in the mountains for hundreds of years—and who will use deadly means to protect their way of life…