Things Get Scary in The New Mutants Trailer 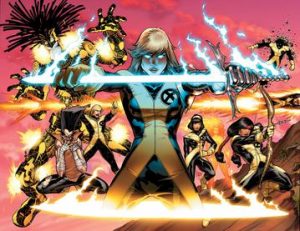 20th Century Fox is proving that it can breathe life into the superhero genre by doing something rather different with The New Mutants; making it a superhero horror movie! And it looks great. Obviously, this is nothing new. We’ve had Blade, Hellboy, Constantine and the schlocky Toxic Avenger proving that the superhero and horror genres can collide wonderfully. But, to incorporate a horror story into an established family-friendly franchise like X-Men is a refreshing and bold decision.

Check out the trailer for The New Mutants below. It shows a new breed of X-Men who are put through their paces when they’re held in a mysterious and terrifying secret facility. Along with a chilling rendition of Pink Floyd’s Another Brick in the Wall, the trailer is submerged in shadows where the dark corners expose something to fear. We love the Nightmare on Elm Street-inspired scare with the hands pressing through the wall.

Synopsis:
Five young mutants, just discovering their abilities while held in a secret facility against their will, fight to escape their past sins and save themselves.

The New Mutants comes from The Fault in Our Stars director Josh Boone – surprising, right? – and stars Maisie Williams, Anya-Taylor Joy, Charlie Heaton, Alice Braga, Henry Zaga and Blu Hunt. The film will be released on Friday 13th April 2018 in Australia, the UK and USA.