Things Get Devilish in the Trailer for Luciferina

A mental and devilish trailer has been released for Luciferina, an Argentine film that follows a group of friends getting more than they bargained for when they go in search of a mystical plant. They stumble upon a terrifying world of satanic rituals and pure horror, while hoping to escape the craziness of the city. How ironic. 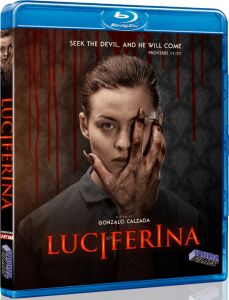 Synopsis:
Natalia is a nineteen-year-old novice who reluctantly returns home to say goodbye to her dying father. However, when she meets up with her sister and her friends, she decides instead to travel the jungle in search of mystical plant.

Luciferina has been directed and written by Gonzalo Calzada and stars Victoria Carreras, Gaston Cocchiatale and Agustin Daulte. You will be able to catch the film when it is released on Blu-ray and DVD on 20th November, before hitting VOD on 4th December.